Born on July 12th 1803 in the hamlet of La Botiere near Montrevel (Ain) of a small-farming family, Peter Chanel spent part of his schooling at Cras and there was noticed by the parish priest, M. Trompier who took him and a companion into the presbytery and began to teach them Latin.

When in 1815 he moved to Monsols the boys went with him and returned with him again a year later to Cras. From here Peter went on to study at the minor seminary of Meximieux in 1819 and in 1824 after some months at the college in Belley entered the major seminary of the Diocese at Brou, being ordained priest on July 15th 1827.

His first posting was as curate to Amberieu where the seminarian Claude Bret, his later friend, fellow Marist and companion on the voyage to Oceania was active in the school.

Since the age of 14, Chanel had been intent on the foreign missions and his intention was strengthened by the letters that arrived at Amberieux from a former curate, now a missionary in India.

The following year he applied to the bishop of Belley for permission to go to the missions but was instead appointed parish priest of Crozet, where he found scope for missionary work. The previous priest had alienated his parishioners and he had a hard struggle to win back their confidence and goodwill.

Having learnt of the Marists in the meanwhile, then the only alternative in the diocese to the diocesan clergy, he received permission in 1831 to join them at Belley and in September that year took with them a vow to work for the establishment of the Society of Mary.

In November of that year his sister Francoise who had been his housekeeper at Crozet joined the Marist Sisters at Bon-Repos. In 1832 Peter became spiritual director of the college, in 1833 accompanied Fathers Colin and Bourdin on their journey to Rome to promote the Society's cause and after his return in 1834 became vice-superior and effective head of the college. In this position he was not exactly a success, a fact of which he was himself painfully aware.

With the offer of the Oceania mission in 1836, he offered his name and was one of the first group of Marists who met for the retreat which culminated in the election of Jean-Claude Colin as General and the first professions on September 24th.

Having visited his family and slipped away in the early morning, he made for Lyons and on October 15th with his companions took part in a service of consecration to Mary before her statue in the shrine of Fourviere. Finally, after a long wait in Le Havre, the band set forth on Christmas eve.

The journey took almost a year, round the Horn and up to Valparaiso on the Pacific coast of South America. In March 1837, Peter's friend Bret died off the Canary Isles and was buried at sea.

Having left Fr. Bataillon and Brother Joseph on the island of Wallis, Pompallier sailed 140 miles further to Futuna and there deposited Chanel and Brother Marie-Nizier (Jean-Marie Delorme, aged 21), trained like all the Brothers at that period by Father Champagnat.

The party was well received by the king of one of the two factions into which the islanders were split and they were allowed to stay. Pompallier left, promising to return with another missionary in six months, a promise he proved unable to keep and which seriously undermined the missionaries' position in the eyes of the islanders.

On the island were also some white English traders and they had the assistance of Thomas Boag an English Protestant and widower of a Futunan woman. Progress was painfully slow and uncertain being mainly a running battle against sickness and malnutrition and later petty persecution. They tried to help the islanders with primitive medicine, to discourage tribal warfare, such practices as abortion and to seize whatever opportunities arose for giving instruction; and administering baptism. Some progress was registered however, but the news that the king's son had been won over proved Chanel's death warrant and the king consented to his murder.

Brother Marie-Nizier escaped to bring the news to Pompallier who hastened from New Zealand with his schooner and a French frigate. There they confronted the terrified islanders. In the meantime, however, the atmosphere had changed, for the king and some others had died of a dreadful disease and in hindsight many recognized their debt to the murdered priest. The whole island was converted. 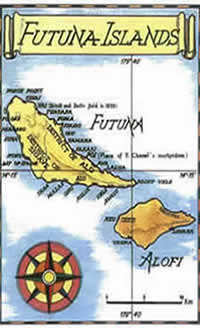